Turn your diaper pail to FRESH with Vanilla Fresh!

Babies are sweet…but their diapers are not!   Between infancy and the toddler years, dirty diapers are part of life.  Even the most diligent parents have a hard time keeping up with soiled diapers that create unpleasant odors in the diaper pail and nursery. SoSafe's Vanilla Fresh is an odor neutralizer.  It works remarkably well and is among the "greenest" cleansers in the industry.  Its a pleasure to use….safe for mom, baby, and for Mother Earth….application is fast and efficient.    Simply spray and leave….no need to scrub.  Vanilla Fresh will do the rest.

Say good-bye to nasty bleach and ammonia-based chemicals whose impact on the diaper pail is short-lived, but have potentially dangerous and long-term impact on you and your child who is exposed to them.  Vanilla Fresh is a safe, effective bleach and ammonia free alternate.

Vanilla Fresh is an ideal cleaner for your nursery.  Safe and effective on all smooth surfaces such as cribs, changing tables, car seats, high chairs, diaper pails, potty seats, and toys.  Simply spray and wipe.  For fabrics, simply mist and Vanilla Fresh does the rest.

Proven effective where traditional odor neutralizers fall short, Vanilla Fresh works equally well in an open diaper pail as in an  enclosed pail, such as the Diaper Genie.  It is highly effective for cloth or cotton, reusable diapers, such as bumGenius diapers, as well as for disposable diapers such as Seventh Generation, gDiapers, and Nature Babycare.

SoSafe Vanilla Fresh is ideal for: 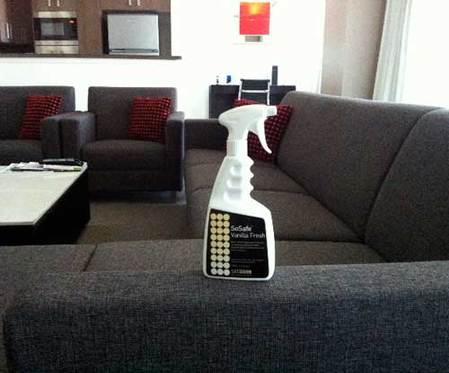 Testimonial: Veteran facilities managers have declared their “love” for SoSafe Vanilla Fresh as it takes the
“bathroom smell out of the bathroom!”